Reliance Industries has successfully bid for the distressed assets of Vadodara-based Kemrock Industries and Exports Ltd, a manufacturer of new materials and composites, in an e-auction held by its lead lender Allahabad Bank. 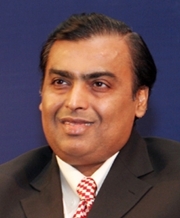 The company was put up for sale by a group of 11 lenders, including Allahabad Bank, Karur Vysya Bank, Union Bank of India, State Bank of India, ICICI Bank and others.

While RIL did not disclose its winning bid's size, the auction notice by the lenders had put the reserve price for the asset at just over Rs673 crore.

Mukesh Ambani-led Reliance Industries Ltd said it has been declared the winner in the online e-bidding process held recently by Allahabad Bank to sell / dispose of the assets of Kemrock Industries and Exports Limited of Vadodara (Gujarat).

The acquisition will help Reliance enter the composites business and establish a leadership position in this large and growing market in India, it added.

Composites are used in a variety of applications and industries such as renewable energy, mass transportation, infrastructure and a host of other industrial products.

Reliance said the entry into the composites and carbon fibre business will further strengthen its petrochemicals business portfolio. Petrochemicals are the main feedstock for manufacturing composite materials.

kemrock, which manufactures fibre-reinforced composites that are used for the aerospace industry, has been running at just 15-20 per cent capacity as banks had refused to lend further working capital to the business, according to reports.

The company was registered as a sick unit with the Board of Industrial and Financial Reconstruction and in 2016, while Kalpesh Patel, CMD and founder of the company, has been declared a wilful defaulter by lender banks.

The shares of the company also stand suspended from trading on the stock exchanges.

Reliance said it is in the process of complying with the necessary formalities for acquisition of Kemrock's assets.