Hardly a month after Reliance Industries announced plans to exit the Eagle Ford Shale (EFS) oil and natural gas joint venture with Pioneer Natural Resources Co by selling its 49.9 per cent stake, its partner Pioneer Natural Resources said it has also agreed to sell 5.75 million shares of its common stock that makes up its 50.1 per cent stake in the EFS Midstream business. 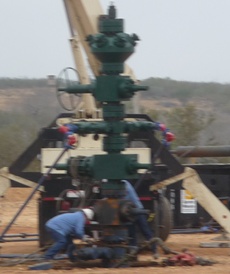 Reliance, which had investments of $208 million in EFS Midstream, had early last month agreed to consider a divestment of its holding in the joint venture. (See: Reliance seeks to exit Eagle Ford shale venture).

Pioneer Natural Resources said that it has agreed to sell 5.75 million shares of its common stock in an underwritten public offering.

Citigroup and BofA Merrill Lynch are acting as joint book-running managers, Pioneer said, adding that it may offer the shares at prevailing market prices or otherwise from time to time through the New York Stock Exchange, in the over-the-counter market, through negotiated transactions or otherwise.

The offer is expected to close on or about 10 November 2014.

The company said it planned to use the net proceeds from the offering for general corporate purposes, including continuing development of its Spraberry/Wolfcamp area assets in West Texas and construction of front-end loaded infrastructure, which is expected to provide significant future cost savings and support for Pioneer's long-term growth plans in the Spraberry/Wolfcamp project.

Pioneer Natural Resources Company is a large independent oil and gas exploration and production company, headquartered in Dallas, Texas, with operations in the United States.

The EFS Midstream business was formed in 2010 to construct facilities to provide gathering and handling services for condensate and natural gas produced from wells on dedicated acreage in the Eagle Ford Shale.

These services are provided for the Eagle Ford Shale upstream joint venture operated by Pioneer, and for various third parties. The EFS Midstream system consists of 10 central gathering plants and about 460 miles of pipelines. Pioneer's cash flow from EFS Midstream is forecast to be over $100 million in 2015.

The Eagle Ford shale asset was originally a three-way joint venture between Reliance, Texas-based Pioneer and a division of Mexico's Alpha SAB de CV, where the three held stakes of 45 per cent, 46 per cent and 9 per cent, respectively.