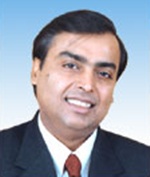 Mukesh Ambani-led Reliance Industries said the company's EBIT (earnings before interest and taxes) margin for its petrochemicals business for the first quarter of 2014-15 stood marginally lower at 7.33 per cent against 7.5 per cent in the previous year quarter.

The EBIT margin for refining was higher at 3.89 per cent against 3.22 per cent in the previous year quarter, the company said in a release.

Quarter-on-quarter, net profit was up 1.3 per cent and revenues up 1.6 per cent.

''RIL has delivered a record level of consolidated net profit, this quarter. This was achieved despite weak regional refining margins and a planned turnaround in our refinery,'' said Mukesh D Ambani, chairman and managing director, Reliance Industries Limited.

''The petrochemicals business performance highlights the strength of our portfolio-mix and end market diversity. Alongside, this robust financial performance, we also made significant progress on our growth commitments. We have a great pipeline of new projects which will give Reliance an enduring competitive advantage.

''We are further expanding our retail business in existing markets while exploring newer markets and channels. At Reliance, social responsibility and care for the environment is an integral part of our economic success,'' he added.

RIL's exports rose 16.8 per cent to Rs66,600 crore year-on-year. Cost of raw materials rose 7.2 per cent year-on-year, mainly due to an increase in crude prices.

Operating profit rose 14.4 per cent Y-o-Y, which the company attributed to higher contribution from its refinery, petrochemicals, and oil and gas business.

RIL's gross refining margin for the quarter stood at $8.7 per barrel against $8.4 per barrel last year and $9.3 per barrel in the April quarter.

The EBIT margin for the oil and gas business stood at 32.78 per cent during the April-June 2014-15 quarter against 19.5 per cent in the comparable quarter in the previous year.

Furthermore, the company registered a Q1 shale gas revenue of $270 million and sales volume of 41.4 BCFe.

"Good results have been achieved despite weak regional refining margins," said Chairman Mukesh Ambani, of RIL, adding that the company has made significant progress on its growth commitments.

"We have a great pipeline of new projects," Ambani said and also hinted at expanding retail operations in existing markets and exploring new ones.

Shares of Reliance Industries on Friday closed down marginally ahead of the company's first quarter results. RIL's scrip ended the day 0.58 per cent lower at Rs976.70 on the BSE. In intra-day, it lost 1.23 per cent to Rs970.20.