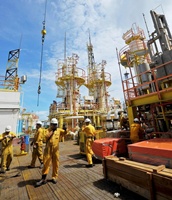 This is one of Venezuela's biggest petroleum projects, and the purchase will strengthen ties between the Latin American nation and RIL, the company's senior vice-president Swagat Bham said at the Petrotech 2014 conference in New Delhi.

The Mukesh Ambani-controlled RIL operates the world's biggest refining complex in Gujarat and derives nearly 80 per cent of its revenue from refining. It is hunting for cheaper, heavier crude oil to feed its refineries.

Venezuela has been Reliance's top crude oil supplier, and in 2012 the company signed a 15-year deal to buy up to 400,000 barrels per day (bpd) of heavy oil from its state-run oil company, PDVSA.

RIL, which had in 2009 dropped out of the winning bid made by an ONGC-led consortium for developing the giant Carabobo-1 project, is "looking at taking over the participating interest of Petronas," Bham said.

The company was in 2009 supposed to bid with ONGC Videsh Ltd for one of the three giant oil blocks that Venezuela had offered through auction. It walked out of the consortium, possibly due to delays in bidding.

The field has about 50 billion barrels of proven reserves, and can produce a minimum of 400,000 bpd of oil.

The stake was first offered to the partners, all of whom including the Indian consortium declined.

Besides RIL, Chinese firms too are said to be interested in the Petronas stake.

Bham said RIL was looking at Petronas stake as well as other heavy oil upgrade projects in Venezuela for a possible participation.

Latin America, he said, was of interest to RIL and the company was also eagerly looking at opening up of exploration licenses in Mexico.

All the partners in the project, including PdVSA, have right of first refusal or pre-emption rights to the Petronas stake.