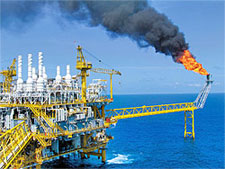 The block was awarded to RIL in the fifth round bidding under the new exploration policy (NELP-V), a company relesae said.

The deepwater block KG-DWN-2003/1 is located in the Krishna basin, about 45 km off the east coast in the Bay of Bengal. The block covers an area of 3,288 sq km.

RIL holds a 90 per cent participating interest (PI) and Hardy Exploration and Production India Inc holds 10 per cent of PI in the block.

The deepwater blocks with thicknesses of 4, 23 and 16 metres were encountered during drilling and, RIL said, it is assessing the potential of these through a wire-line based technology called Reservoir Characterisation Imager (RCI).