Mukesh Ambani-led Reliance Industries Limited today announced yet another oil find in the Cambay Basin, in an oil block in which it holds a 100 per cent participating interest. 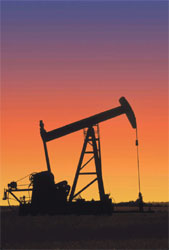 It said that the discovery, named 'Dhirubhai-43' has been notified to government of India and directorate general of hydrocarbons.

RIL aanounced the oil find through a media statement, that it made the first oil discovery in the onland exploratory block CB–ONN–2003/1 (CB 10 A&B), which was  awarded to the company under the NELP-V round of exploration bidding.

"RIL holds 100 per cent participating interest (PI) in this block which is located at a distance of about 130km from Ahmedabad in Gujarat in the Cambay basin," the statement said.