More reports on: In the news, Pharmaceuticals

Malvinder and Shivinder Singh, the original promoters of Ranbaxy Laboratories, will challenge the order of a Singapore tribunal imposing a Rs2,562-crore ($400 million) penalty on them for concealing information from Japan's Daiichi Sankyo while selling their majority stake in the Indian drugmaker in 2008. 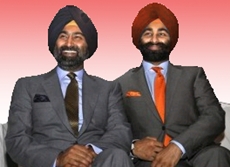 In a majority ruling this week, the three-member arbitration panel in Singapore imposed the fine on the billionaire brothers earlier this week in a case filed by Daiichi Sankyo in 2013.

The panel found that the Singh brothers had covered up key information on the company while selling their controlling stake in Ranbaxy Lab to the Japanese company in 2008 (See: Former Ranbaxy promoters ordered to pay Rs2,500 cr damages).

The duo is expected to appeal in the arbitration tribunal itself and in one of the Indian courts.

In a news release, the family's holding company, RHC Holding, said it is exploring further legal options to challenge the award given on Tuesday.

A statement on behalf of the family said: ''….the Arbitration Tribunal has issued an award, where the law governing the dispute was Indian Law, by a majority of 2:1 in favour of the claimant (with Justice AM Ahmadi, former Chief Justice of India, giving a dissenting opinion dismissing all claims of the claimant) for damages of an amount of Rs2,562.78 crore (approx).''

When the Singh family sold its stake to Daiichi, some plants were under the regulatory scanner of the United States Food and Drug Administration. Daiichi claims this was not revealed to them during the sale process and the relationship turned sour as details emerged on the extent of the problems.

Daiichi eventually had to fork out $500 million to settle criminal and fraud charges against it in the US market. Four of the plants are banned from making and selling products in the US.

Daichi had since sold Ranbaxy to Sun Pharma, which catapulted Sun Pharma as the country's top pharmaceutical firm.