Petronet LNG Limited (PLL) today announced the signing of a memorandum of understanding (MoU) with US natural gas firm Tellurian wherein Petronet and its affiliates propose to purchase up to five million tonnes per annum (5 mtpa) of liquefied natural gas (LNG) from Tellurian Inc’s Driftwood project in Louisiana. 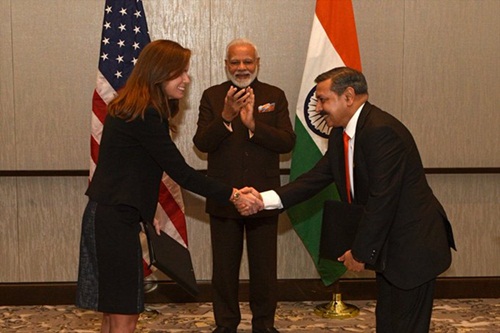 The signing of the MoU coincides with Prime Minister Narendra Modi’s visit to the US to attend the Howdy Modi event in Houston, Texas.
Petronet  plans to source LNG from Tullurian’s Driftwood project, concurrent with its equity investment, which remains subject to further due diligence and approval of its board of directors.
"Tellurian Inc and Petronet LNG Ltd announced (September 21) that the two companies have signed a Memorandum of Understanding (MOU) wherein Petronet and its affiliates intend to negotiate the purchase of up to five million tonnes per annum (5 mtpa) of liquefied natural gas (LNG) from Driftwood, concurrent with its equity investment, which remains subject to further due diligence and approval of its board of directors," the US firm said in a statement.
Tellurian is offering an equity interest in Driftwood Holdings, which comprises Tellurian's upstream company, its pipeline and the upcoming terminal in return for commitment to offtake gas.
Tellurian and Petronet hopes to finalise the transaction agreements by 31 March 2020.
President and CEO Meg Gentle said, “Petronet, India’s largest LNG importer, will be able to deliver clean, low-cost, and reliable natural gas to India from Driftwood. Increasing natural gas use will enable India to fuel its impressive economic growth to achieve Prime Minister Modi’s goal of a $5 trillion economy while contributing to a cleaner environment. It is an honor to sign the MOU with Petronet in the presence of H.E. Prime Minister Narendra Modi. At Tellurian, we look forward to a long and prosperous partnership with Petronet in the Driftwood project.”
India, the world’s third-largest oil importer, plans large energy import from the United States, as the two countries further strengthen their strategic energy partnership, an initiative that was launched in New Delhi in April last year.
State-run oil refining and marketing companies like Indian Oil Corporation Ltd (IOCL) also import large quantities of crude oil from the US.
Tellurian’s Driftwood project includes natural gas production, gathering, processing, and transportation facilities, along with Driftwood LNG, a proposed ~27.6 mtpa liquefaction export facility that will be located near Lake Charles, Louisiana on the US Gulf Coast.
In April, the US Federal Energy Regulatory Commission (FERC) issued the order granting authorization for Driftwood LNG and the 96-mile Driftwood Pipeline, which will inter-connect the LNG terminal to the US natural gas market.
India is looking to raise the share of natural gas in its energy basket to 15 per cent by 2030 from 6.2 per cent at present. The company is also expanding its pipeline network and building new LNG import terminals to encourage use of the cleaner fuel.
At present, state-owned GAIL India Ltd has 20-year LNG contracts to buy 5.8 million tonnes per year of US LNG, split between Dominion Energy Inc's Cove Point plant and Cheniere Energy Inc's Sabine Pass facility in Louisiana.
MORE REPORTS