Ola Electric has raised $250 million from SoftBank as India’s largest ride hailing firm pushes to scale its electric vehicles business in the country, reports said citing filings with the ministry of corporate affairs. 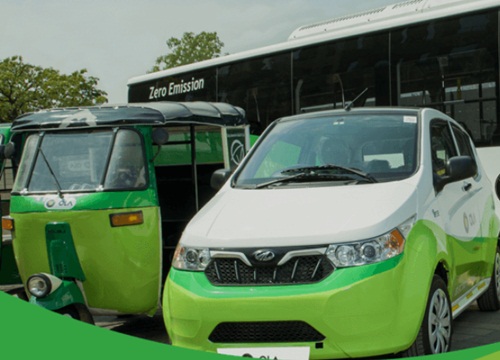 The Series B financing round values Ola Electric at $1 billion, reports citing sources familiar with the matter said.
The new funds will give Ola much-needed resources for its push into electric mobility, which is also key to Ola’s expansion plans within the Indian market.
Ola’s move also supplements government’s efforts to curtail air pollution and carbon emissions. The country has set an ambitious goal of converting 40 per cent of the cars and two wheelers with ride-sharing companies to electric by 2026.
The government is targeting 30 per cent EV penetration in the market by 2030, and has set a 40 per cent EV mobility target for ride-sharing companies, to be achieved by April 2026.
Ola has been working on electric vehicles for several years as part of its efforts to cut cost and stay relevant. The company is running several two-wheeler and three-wheeler electric vehicles pilot programs across the nation. It is also building charging infrastructure and swappable battery systems for these vehicles.
Ola Electric, which raised $56 million earlier this year, plans to bring 10,000 e-vehicles to road by end of this year and deploy a million similar vehicles over the coming years.
The parent group, which raised $300 million from Hyundai and Kia to expand its mobility solutions and electric vehicles programmes as part of an ongoing Series J round earlier this year, is also partnering with original equipment manufacturers to scale the EV business.
The firm, which already has presence in the UK, New Zealand, and Australia, last month announced that it will set shop in Uber’s backyard. Ola said it will build a new advanced technology center in San Francisco and employ more than 150 engineers there.
“As we think of the next decade, we want to invest in and we want to be very relevant on the global scale business front as well as building new-age, cutting edge technology which impact the new age business model of the future, there is no better place in the world to do it than here in the Bay area, we have made a small start, we will be hiring close to around 100-150 people here this year and from there we will take it beyond,” Ola cofounder and CEO Bhavish Aggarwal said at a recent conference.
The funding for scaling up of Ola Electric also comes at a crucial time when government and regulatory agencies are putting pressure on ride-sharing companies to transition to electric vehicles. The government has also mandated that ride-sharing companies will have to transition to EVs from next year to achieve 2.5 per cent electrification by 2021, 5 per cent by 2022, 10 per cent by 2023, before hiking it to 40 per cent by April 2026.
The government’s think tank, NITI Aayog had given two weeks to auto makers to share their plans for the roadmap to achieve such transition. Multiple automobile companies and industry bodies such as the Confederation of Indian Industry (CII) and the Society of Indian Automobile Manufacturers (SIAM) have said that the government is making a hasty decision.
Electric vehicle sales in India stood at 7.59 Lakh units in FY2019. Thos included sale of 1.2 lakh two-wheelers, 6.3 Lakh three-wheelers and 3,600 passenger vehicles. However, the country lacks the necessary infrastructure and adequate technology to push ahead with electric vehicles.
MORE REPORTS