Expanding beyond taxis to grab a slice of the food delivery market in the country, online cab aggregator Ola has acquired Foodpanda's India unit from Germany's Delivery Hero in an all-stock deal, the two companies said Tuesday. 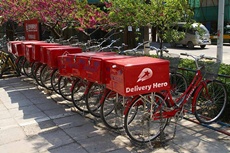 The deal includes the transfer of Foodpanda's India business to Ola in exchange for Ola shares, a press statement said.

Under the agreement, Ola, owned by ANI Technologies, will also commit to investing $200 million in Foodpanda's India business, though no timeframe was given for this investment.

The deal is reported to have valued Foodpanda India at around $40 million. However, there was no official word on the financials of the transaction.

Saurabh Kochhar, who was heading Foodpanda India, will move out of the company and Pranay Jivrajka, founding partner at Ola, has been appointed as interim chief executive of the new business unit. The top management of Foodpanda along with Jivrajka will draw up a roadmap for restructuring of the top deck, reports said.

UberEats delivers in about half a dozen Indian cities while Foodpanda is present in more than 100 cities. Other online food delivery services include Sequoia Capital-backed Zomato and Swiggy which is backed by Naspers.

While Zomato and Swiggy claim to be clocking about 3 million and 4 million orders a month, respectively, Foodpanda is estimated to be doing about over a million orders per month on an average.

"As one of India's pioneers in the food delivery space, Foodpanda has come to be a very efficient and profit-focused business over the last couple of years. Our commitment to invest $200 million in Foodpanda India will help the business be focused on growth by creating value for customers and partners," said Bhavish Aggarwal, cofounder and chief excutive of Ola.

Not being able to raise fresh funds, last year Foodpanda's parent Rocket Internet had started the process to sell the company crunch.

"The partnership with Ola will allow us to further consolidate markets where it strategically makes sense to collaborate with leading local players. At the same time, we consider our stake in Ola as a very valuable asset, while Ola's investment commitment in Foodpanda India is a clear and confident signal to the Indian market," said Niklas Ostberg, chief executive and cofounder of Delivery Hero AG.

Delivery Hero, which floated on the stock exchange in Germany in June, had acquired food delivery firm Foodpanda and its Indian subsidiary in December 2016.

Foodpanda India reported a 64 per cent increase in revenue at Rs62.16 crore ($9.7 million) for the fiscal year ended 31 March and losses narrowed to Rs44.81 crore from Rs143 crore in the year-ago period, according to media reports.

The online food delivery market in India is expected to grow more than six-fold to $750 million this year from about $120 million in 2015, according to a report by consultant RedSeer.