Oil India Limited has reported a major oil discovery in the Rajasthan field and the Director General of Hydrocarbons has cleared it for commercial production, NDTV Profit quoted industry sources as saying. 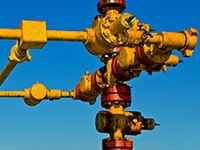 The discovery, christened `Punam-1' is "significantly big," the sources said.

Oil India expects crude output at the new discovery to be around 30,000 barrels per day, the sources added.

The new oil find is reported to be close to Cairn India's oil block in Rajasthan, which is jointly operated with another state-run explorer Oil and Natural Gas Corporation (ONGC) as junior partner.

Meanwhile, Oil India is considering a joint bid with the overseas arm of the other state-run explorer Oil and Natural Gas Corporation (ONGC) Ltd (OVL) for a 20-per cent stake in Mozambique oil field (See: ONGC-OIL in race for Videocon's Mozambique gas stake).

OVL and OIL will jointly bid for the 20-per stake that US exploration group Anadarko and India's Videocon group are selling in Mozambique's Rovuma gas field.

The 20-per cent stake in the Mozambique field is being sold in an auction and could cost as much as $4.5 billion, the report said (See: After Videocon, Anadarko puts 10 % stake in Mozambique gas field on the block).

The OIL stock reported a 3 per cent gain in afternoon trading on the Bombay Stock Exchange (BSE) at Rs543.70. The stock was the top gainer on the BSE Oil and Gas index.

OIL has over 1 lakh sq km of petroleum exploration licence/ mining lease (PEL/ML) areas for exploration and production activities within the country, mostly in the North East, which accounts for its entire crude oil production and majority of gas production.

Rajasthan is the other producing area of OIL, contributing 10 per cent of its total gas production.