ONGC Videsh Ltd, the overseas investment arm of the state explorer, signed agreements in Moscow to buy 15-per cent stake in the Vankor oil field in East Siberia, sources said. 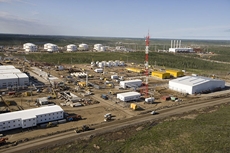 State-owned Oil and Natural Gas Corporation (ONGC) has bought a 15 per cent stake in the Vankor oil field in East Siberia, from Rosneft, for about $1.35 billion (approximately Rs8,932.95 crore).

The acquisition of the Vankor stake, Russia's second-largest oil field, will give OVL about 3.5 million tonnes of oil a year.

OVL will also get two seats on the board of directors of Vankorneft, a Rosneft subsidiary that operates the Vankor field, as per the terms of agreement.

Rosneft will, however, retain overall control of infrastructure of the Vankor cluster, sources said.

Vankor, which started production in 2009, holds recoverable reserves of about 500 million tonnes of oil.

Vankor reported production of about 80.9 million barrels of oil in the first six months of the year.

The field produces more than 60,000 tonnes (about 440,000 barrels) a day and is one of the main sources of supply for the eastern Siberia-Pacific Ocean pipeline, the company said on Friday.

ONGC was reported to be seeking to pay $900 million for a stake in Vankorneft, a person with direct knowledge of the plan said last month.

ONGC Videsh also owns 20 per cent in the Sakhalin-1 project off Russia's far eastern coast, which it acquired in 2001. Besides, ONGC spent $2.1 billion to buy Imperial Energy Corp in Russia in 2009, output from which witnessed a decline.