State-owned Oil and Natural Gas Corporation (ONGC) will borrow as much as Rs35,000 crore to help the government meet its divestment target and reduce its fiscal deficit. 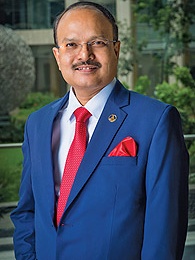 Accordingly, ONGC has raised it first-ever debt-raising plans by 40 per cent to finance its Rs36,915-crore acquisition of Hindustan Petroleum (HPCL).

ONGC chairman and managing director Shashi Shanker said the company's board has approved raising of the borrowing limit from Rs25,000 crore to Rs35,000 crore. This will be the company's first ever debt.

''We will use our (Rs12,000-13,000 crore) cash first and then the liquid assets and debt will be last,'' Shanker told reporters. ''This order can change, because we won't sell the liquid assets in distress. Also, we have offers for over Rs50,000 crore debt at very competitive rates, both foreign currency and local.''

However, ONGC will be paying 14 per cent premium over HPCL's Friday closing price and more than 10 per cent of the 60-day weighted average of the HPCL scrip.

Reports, meanwhile, said while the government was seeking as much as Rs69,000 crore for selling controlling stake in HPCL.

The government on Saturday announced the signing of an ''agreement with ONGC for the strategic sale of its 51.11 per cent equity share-holding in HPCL at a consideration of Rs36,915 crore.''

Under the revised divestment policy, the government will retain its hold on public sector enterprises while divesting in less efficient units. The emphasis is on efficient management.

The government, accordingly, expanded the approach from of divestment to investment and public asset management. As part of investment management strategy, government decided to explore possibilities of consolidation, mergers and acquisitions within CPSE space. An announcement in this regard was made by the finance minister Arun Jaitley in his budget speech of 2017-18.

''In line with the budget announcement, ONGC proposed to acquire the government of India's existing 51.11 per cent equity shareholding in Hindustan Petroleum Corporation Ltd (HPCL). The union cabinet, in its meeting held on 19 July 2017, gave 'in-principle' approval to the said proposal and decided to set up an alternative mechanism under the finance minister to decide on the price, timing and the terms and conditions of the strategic sale.'' An official release said.

''Through this acquisition, ONGC will become India's first vertically integrated 'oil major' company, having presence across the entire value chain. The integrated entity will have advantage of having enhanced capacity to bear higher risks, take higher investment decisions and neutralising the impact of volatility of global crude oil prices. In this process, ONGC has acquired significant mid-stream and downstream capacity and will attain economies of scale at various levels of operations.''

However, HPCL will continue to be a central public sector enterprise (CPSE), the release added.