State-run Oil and Natural Gas Corp (ONGC) and its partners will invest about $24 billion in a giant field off Mozambique for producing natural gas and converting it into liquid fuel (LNG) for export to consuming countries like India. 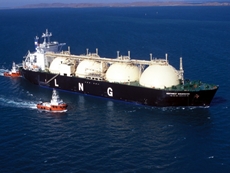 ONGC Videsh Ltd, the overseas investment arm of ONGC, holds 16-per cent stake in Mozambique's Rovuma Area 1 field, which is estimated to have recoverable resources in excess of 75 trillion cubic feet.

Together with BPCL, which has 10-per cent and Oil India Ltd (4 per cent) the Indian partners hold 30 per cent stake in the field - more than the 26.5 per cent stake that operator Anadarko of the US holds.

The partners have so far committed investments of $16 billion and hope to achieve financial closure by December or early January.

The plan is to collect the natural gas from the gas field at an onshore facility for liquefaction (LNG) before shipping it to consumption centres like India.

Production of natural gas from the field is expected to start in the first quarter of 2020.

The Mozambique government has passed an enabling legislation for setting up a plant for conversion of natural gas into liquefied natural gas (LNG) at an onshore location. The LNG will then be exported in cryogenic ships to consumption centres like India.

"The Mozambique government has passed a decree law, paving way for start of construction work on the project. An estimated $23-24 billion will be required to bring first set of discoveries in Rovuma Area-1 on to production and convert that gas into LNG," reports quoted a senior official in the consortium as saying.

"The decree law essentially means that the cost of bringing the gas field to production as well as building of liquefaction (LNG) plant will be cost recoverable i.e. all investments will be recouped from sale of gas first before profits are shared with Mozambique government," he said.

The initial plan is to produce two LNG trains of about 6 million tonnes per annum each of liquefied natural gas to be dispatched from the Golfinho-Atum Field in Rovuma Area-1.

The project will have an ultimate capacity to produce 20 million tonnes of LNG annually and will be the world's largest LNG export site after ExxonMobil-run Ras Laffan in Qatar.

Rovuma Area-1 Offshore Mozambique Block (Block Area 1) is located along the coasts of northern Mozambique and southern Tanzania in the Indian Ocean.

Besides Texas-based energy-exploration company Anadarko, which is the operator of the block with 26.5 per cent stake, other partners include Mitsui (20 per cent), ENH (15 per cent) and PTTEP (8.5 per cent).