ONGC to invest over Rs41,000 crore in new fields

State-owned Oil and Natural Gas Corp (ONGC) plans to invest around Rs41,678 crore over the next 20 years to bring into production newer oil and gas fields and redevelop ageing fields. 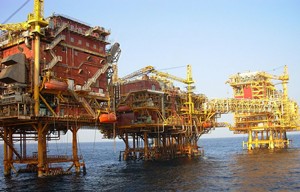 The board of ONGC at its meeting on 28th May, 2015 also approved investment of Rs1881.22 crore for redevelopment of Gamij field under stage gate process at Ahmedabad.

The Gamij field, located east of Ahmedabad city, is the first onshore field being developed under the stage-gate process. The project cost includes drilling of 280 wells and creation of surface facilities like group gathering stations

ONGC, which produced 22.26 million tonnes of crude oil and 23.52 billion cubic meters of gas in 2014-15, is also boosting investment to reverse the declining trend in output at most of its old and ageing fields.

ONGC claims to have reversed a continuous decline in production of crude oil over the last seven years. Offshore oil production has gone up by 4.3 per cent rising from 15.51 MMT (FY'14) to 16.18 MMT (FY'15).

ONGC will invest Rs24,188 crore in development of six projects both on the east and west coast. Another Rs17,490 crore will be spent on redeveloping its prime Mumbai High fields as well as Heera-South Heera fields in western offshore, company sources said.

The company is investing Rs6,086 crore in its biggest project is the western offshore Daman field development to produce 27.67 billion cubic meters (bcm) of gas by 2034-35.

Reports quoting sources said production is expected by July 2016 at an average rate of 2 million standard cubic meters per day with likely peak output of 8.35 mmscmd of gas and 9,286 barrels of condensate per day is by 2018-19.

ONGC is investing Rs4,620 crore in the neighbouring South Bassein field for additional development by April 2017 to raise production by 18.83 billion cubic metres by 20130-31

On the east coast, ONGC is investing Rs4,124 crore in developing the Vashista and S-1 gas fields in Krishna Godavari basin. The project will be completed by April 2017 and give an incremental gas production of 15.96 bcm.

Another Rs5,000 crore is being spent on Krishna Godavari basin field of  Agyalanka, which will start production from September next year.

ONGC will also invest Rs5,813 crore in redeveloping the Mumbai High North field with a view to enhance recovery factor and increase the longevity of the prime asset.

Another, Rs6,069 crore is being spent on Mumbai High South fields and another Rs5,608 crore in redeveloping the Heera and South Heera oil and gas field in the western offshore.

Meanwhile, Cairn Energy India Private Limited has handed over operatorship of NELP block Nagayalanka KG-ONN-2003/1 to ONGC and ONGC, as the operator,  plans to drill 20 horizontal wells - 2 in Phase I and 18 in Phase II - with multi-stage hydro-fracturing in high pressure – high temperature domain.