Sudhir Vasudeva, chairman of ONGC, was quoted by Reuters, "I can categorically say that we have not made a bid yet. We keep on looking at international opportunities."

The reports said that consortium has yet to finalise the structure of the deal, but is likely to form a common overseas special purpose vehicle (SPV) to acquire the assets if they emerge as the winning bidder.

Early this year, Houston-based ConocoPhillips had announced plans to sell 50 per cent of its stake in six Alberta properties spread over 715,000 acres that produce around 12,000 barrels of oil a day from an estimated 30 billion barrels of bitumen.

ConocoPhillips has retained Scotia Waterous to run the sale process and the first round of bids has attracted interests from international oil companies, including from China.

The Surmont project, located approximately 63km southeast of Fort McMurray, Alberta, in the Athabasca oil sands region, is the only producing asset and is operated by ConocoPhillips Canada.

The Surmont project is an equal joint venture with Total of France, and the partners are working on Phase 2, slated to begin production in 2015, which will increase gross production capacity from 27,000 to 110,000 barrels per day.

Even if the consortium emerges as the winning bidder, the deal may not pass regulatory approval in the US unless the Indian government intervenes. 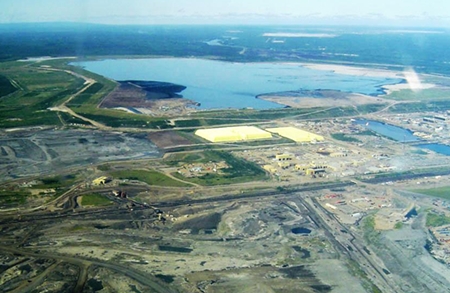 ONGC has investments in Sudan and Iran, where the US has imposed trade sanctions against both these countries.

OVL already has stakes in 33 projects in 14 countries, including countries on the US sanction list like Myanmar, Syria, Sudan, Cuba and Iran.

A senior ONGC official had said early this month that the a legal opinion taken had warned it of forfeitures of its proposed investments to acquire energy assets of US-listed companies because of ONGC's interests in countries where the US has imposed trade sanctions, and  added that the investment will put billions of dollars at risk.

Although the US has been urging other nations to join its efforts against doing any business with Iran in order to rein in Tehran's nuclear ambitions, opposition from China and Russia has watered down international sanctions in the past.

ONGC, whose crude-oil output declined 6.3 per cent over four years to 24.42 million tonnes, or 488,400 barrels a day, in the year ended 31 March 2011, from 26.05 million tonnes a year earlier, has recently been criticised for not pursuing overseas acquisitions although it is sitting on a cash pile of around Rs22,000 crore ($4 billion).

Indian state-owned oil majors have moved like a tortoise on potential overseas acquisitions although valuations of oil assets have recently fallen due to the global economic turmoil.

The last big ticket acquisition done by OVL was the 2009 purchase of Russia-focussed Imperial Energy for $2.1 billion, but this acquisition is now proving to be miscalculated purchase. OVL lost Rs118 crore in the 15 months ended March 2010 due to lower production, the Comptroller & Auditor General of India said in March 2011.

Due to unrest in Syria, Libya and a pipeline payment dispute between South Sudan and neighbouring Sudan, OVL's production have nearly halted in these three countries since the past eight months.

ONGC has failed to enter oil resource rich Angola, although the then oil minister Murli Deora in 2010 toured a few African nations including Angola and came back with tall promises of setting up joint ventures for exploration with Angolan state-owned oil company Sonogal. (See: Murli Deora goes on African oil hunt with small change)

India, the world's fourth-largest oil importer, buys nearly 80 per cent of its oil from abroad. With increasing demand, state oil firms have been asked by the government to secure energy assets overseas to help power the expanding economy.

OVL has been given a target to source 60 million tonnes of oil and oil equivalent gas per year by 2030.

Unlike other nations like China that use huge sovereign wealth funds to make overseas acquisitions, India has no such fund. Such a fund would prove valuable in acquiring foreign resources when hydrocarbon assets values have plunged in the wake of global economic crisis.

The much needed fund is required to sidestep the multi-layers of approvals required for Indian oil and gas majors to make instant decisions in acquiring resources.

Thee petroleum ministry had in 2010 recommended a fund at least the size of $25 billion keeping in view of the country's healthy forex reserves.