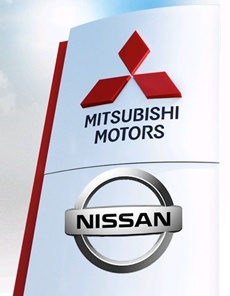 Japanese broadcaster NHK yesterday reported that Nissan is in advanced talks to buy a 33-per cent stake in Mitsubishi Motors for¥200 billion ($1.85 billion) after Mitsubishi yesterday revealed that its cheating on gas mileage ratings extends to more models than previously revealed.

"Nissan and Mitsubishi are discussing various matters including capital cooperation, but nothing has been decided," the two Japanese automakers said in separate statements.

Mitsubishi Motors' shares were suspended from trading after news emerged of the possible tie-up.

A 33-per cent stake would make Nissan the single largest shareholder in Mitsubishi Motors.

Currently, Mitsubishi Heavy Industries Ltd is Mitsubishi Motors's biggest single shareholder with about a 20 per cent stake, followed by Mitsubishi Corp with 10 per cent, Bank of Tokyo-Mitsubishi UFJ with 4 per cent.

Nissan and Mitsubishi already are in partnership for developing and producing several mini cars with 0.66 liter engine displacements for the Japanese market, but these sales have stopped since late April after Mitsubishi acknowledged that it had overstated the fuel economy for these cars.

Mitsubishi last month admitted that it overstated the fuel economy of four of its mini-vehicle models for the Japanese market - the Dayz and Dayz Roox which are marketed under Nissan's brand name, and two other models under the Mitsubishi brand.

On Wednesday, Mitsubishi Motors extended its cheating on fuel mileage ratings to nine models sold in Japan and others that are no longer sold, encompassing virtually all the models it sold in its home country.

Analysts opine that Mitsubishi will face up to $1 billion in compensation payments to its customers and its partner Nissan.