Japanese automaker Nissan Motor India today released a sketch of the new global sedan based on the Nissan's 'V' platform that will roll out from the company's plant at Oragadam near Chennai. 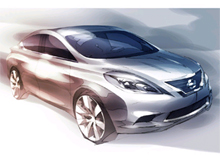 Nissan Motor India managing director and CEO Kiminobu Tokuyama said in a company statement, "Following the success of our first locally made car-the Nissan Micra, we are happy to reveal the first sketch of the second car to be produced in India,"

"We are confident that the 'New Global Sedan', which is also based on the versatile 'V' platform, will delight the discerning Indian customers", he said.

The new global sedan, the second product after the launch of the Micra from Nissan stable would be on display at the eighth China (Guangzhou) International Automobile Exhibition, to be held in December, the company said.

The company said though the model would be initially launched in China, its formal launch in India would take place in the second half of 2011, following its unveiling at the 8th China (Guangzhou) International Automobile Exhibition in December, 2010.

The company said the New Global Sedan would be a completely new look sedan based on Nissan's 'V' platform.