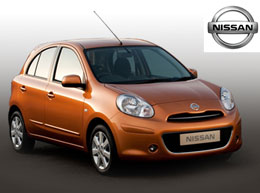 Domestic sales would commence from July and exports from September, it added.

The first Micra compact car rolled out of the unit's factory today. The cars will be put on display across showrooms in India from Tuesday, when bookings will also be taken, the company said in a statement.

"We are introducing a product that has been specifically designed keeping in mind the discerning consumer needs of India," Nissan Motor's chief operating officer Toshiyuki Shiga said. The cars will be exported to Europe, the Middle East and Africa.

The manufacturing unit, in which Nissan along with its alliance partner Renault is investing Rs4,500 crore over seven years, has the capacity to produce 400,000 units annually and will be used by the partners as a global hub for exports.

Global car companies are vying for a share of India's compact car segment, which is about 70 per cent of the total passenger car market. India's top carmaker Maruti Suzuki is the undisputed leader in the segment with brands such as the best-selling Alto, Swift and Ritz.

Earlier launches this year in the compact segment were General Motors' Beat, Ford's Figo and Volkswagen's Polo hatchback, with the Polo sedan expected in June and Toyota's Etios towards the end of the year.