The US Department of Energy (DoE) yesterday gave a $1.4-billion loan to Japan's third-largest car maker Nissan to modify its facilities at its Smyrna, Tennessee, plant for building electric cars. 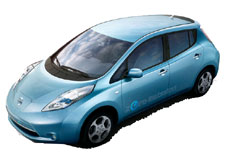 The loan was extended to Nissan's Smyrna plant, which will be manufacturing its zero-emission, all-electric vehicle, the 'Leaf', and the lithium-ion battery packs to power them.

The loan was given from the $25-billion Advanced Technology Vehicles Manufacturing Loan Program authorised by the US Congress in 2007 to help automakers boost fuel economy in their vehicles by about 40 per cent by 2020.

The programme is designed to accelerate the development of vehicles and technologies that increase US energy independence, create cleaner means of transportation and stimulate the US economy.

In June, the DoE had said that automakers, Ford, Nissan, Fisker Automotive and Tesla Motors would receive nearly $8 billion in US Federal low-interest loans from the $25-billion advanced technology vehicles manufacturing incentive programme. (See: US loans $8 billion to carmakers to make fuel-efficient cars)