Nissan has showcased the Cube city car concept at the British International Motor Show. The version displayed in the ExCeL halls is a battery-electric motor car. Presently, Nissan Cube city will be on sale in Japan only.

Nissan has confirmed, however, that advances in lithium-ion battery technology have made possible a plan to sell an electric car in Europe within three years. The
company's vice-president of product planning, Pierre Loing, said the car would be an all-new model, not an electric version of an existing car. ''European sales will
start in 2011, and we would like to be mass producing electric cars - not just one or two hundred - by 2012,'' he said. 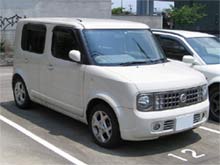 Loing asserted that technical breakthroughs are needed, particularly to improve the recharging times of the batteries. 'Plus' versions of the lithium-ion batteries will be able to be 80 per cent recharged in less than half an hour, removing one of the major perceived drawbacks of electric cars. ''Nissan's first-generation European electric vehicle will be able to seat four to five adults and have a range of 100 miles,'' he added.