May collaborate, not take over Roche: Novartis

Swiss pharmaceutical group Novartis says it will work more closely with rival Roche, but has ruled out a merger. Asked whether the two companies wanted to stay independent, Joerg Reinhardt, who took over as Novartis chairman in August, told Swiss newspaper SonntagsZeitung on Sunday, "Absolutely." 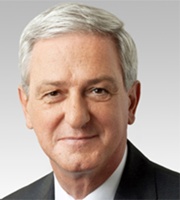 He said, however, that he'd met outgoing Roche chairman Franz Humer a few weeks ago and was also exchanging emails with his successor Christoph Franz.

"Two pharma groups working in the same location have many topics in common," he said. Both Roche and Novartis are based in Basel in north-western Switzerland.

Asked whether Novartis could sell its stake in Roche that was built up under his predecessor Daniel Vasella, Reinhardt said, "The shares are in good hands with us. For as long as Roche does well, we take pleasure in them." Novartis holds a third of Roche's bearer shares.

Reinhardt said in the interview Novartis hoped to conclude an ongoing review of its over-the-counter drugs, animal health and vaccines businesses by the end of the year.

"Then we will know if and how we have to change our structure and organization," he said, adding discussions on possible buys or divestments were under way with partners.

"There are not many players and everybody talks to everybody," he said.

Novartis said in January it was looking at options for the three businesses and wanted the review to be completed by the end of summer.

Reinhardt said Novartis' profitability was only temporarily under pressure due to quality issues in the US and Canada, the fact that the vaccines division was not profitable and falling sales of its former blockbuster Diovan. "Our profitability will rise again," he said, without specifying how this would come about.