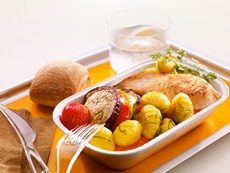 Potential buyers could include food service providers such as Brake Brothers, Booker Group and Sodexho as well as private equity firms Bain & Co and Clayton, Dubilier & Rice, the report said.

Davigel was founded in 1963 and was part of the Buitoni frozen food business until Nestle acquired it in 1989.

Davigel is Europe's leading provider of frozen and chilled food solutions, and supplies meals to a number of hospitals and healthcare institutions.

Davigel offers nearly 3,000 products, supplies more than 990 million meals to patients every year and has annual turnover of €783 million .

The company is based in France, employs more than 3,000 people, operates three factories and is present in 10 countries in Europe.

Nestle had said last August that it would take a good look at its non-performing brands after having posted its weakest quarterly results in four years.

It then sold its Jenny Craig weight management businesses in North America and Oceania to private equity firm North Castle Partners, and its US frozen pasta business to Brynwood Partners.

Other companies have recently reassessed their portfolio of non-performing assets and have been divesting some brands in developed regions.