US biotech giant Monsanto is at the receiving end for its prime products, the co-called Roundup crops and neonicotinoid' pesticides that have now turned up to be carcinogenic. 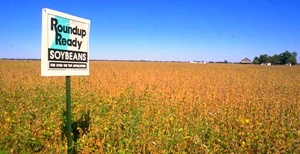 Thousands of people across 400 cities in 40 countries – from New York in the US to Ouagadougou in the West African country of Burkino Faso  - staged anti-Monsanto protests.

Thousands of people hit the streets in cities across the world, including the Swiss cities of Basel and Morges, where the company has its headquarters for Europe, to protest against the American biotechnology giant and its genetically modified crops and pesticides.

The controversial product's main ingredient was recently classified as "probably carcinogenic to humans" by the World Health Organisation.

"Looking for mass suicide? Go for Roundup," read one placard at another French protest in the western city of Rennes.

Protestors in Burkina Faso demanded a 10-year moratorium on the planting of Monsanto seeds of GM cotton until "independent research can be conducted" into the effects of the technology.

Protestors in Europe gathered in front of the European Parliament in Strasbourg in the evening for a minute's silence "in homage to the existing and future victims poisoned by pesticides," according to the organisers.

Similar protests were held in Los Angeles and Rio de Janiero with whole families, including small children, taking part. "I'm not a science experiment," read the sign of a young girl in a pushchair, while demonstrators chanted: "Hell no GMO!"

Anti-GMO protestors were joined by beekeepers in Ontario, who symbolically dumped a coffin full of dead honey bees in front of the crowd. The bees were gathered from farms across the province where they died over the winter.

Significant honey bee mortality rates in North America have been linked to `neonicotinoid' pesticides used on corn and soybean crops.

Ontario's ministry of agriculture, food and rural affairs had, last year, revealed a plan to reduce the use of `neonicotinoid' pesticides in the province by up to 80 per cent by 2017.

The federal government is also looking at the possibility of limiting their use nationwide. But nothing has been done so far.

"People are here to take back control of the food system," CBC news quoted Jodi Koberinski, who calls herself a food sovereignty activist.

"We want government to hold these corporations responsible for the damage they are creating."