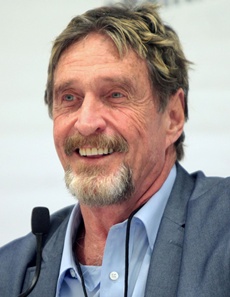 Rejecting suggestions that the alleged incident has undermined his own credentials, the cyber-security pioneer said, "I have no control over Twitter's security".

However, he also posted that he believed his mobile phone had likely been compromised. Twitter declined to comment, but highlighted its security advice guide.

The social network uses two-factor authentication, which requires a user to enter a code sent to a mobile phone in addition to a password to access an account in order to avoid such incidents.

He told the BBC that he had activated the option, but he believed the hacker had intercepted the authentication code.

"The first indication that I had been hacked was turning on my cell phone and seeing the attached image," he said.

McAfee shared a smartphone screenshot, which he suggested showed that his calls and texts had been hijacked by a hacker

"I knew at that point that my phone had been compromised. I was on a boat at the time and could not go to my carrier (AT&T) to have the issue corrected.

McAfee, a former security tycoon, is now considered something of an expert in crypto-currencies.

He is currently heading the Bitcoin mining operation MGT Capital Investments, which solves complicated mathematical problems to verify transactions in the virtual currency.

McAfee had been, of late, using Twitter for his daily ''coin of the day'' recommendation, and on Tuesday this week he said he would slow down his recommendations to once a week, and the next of which would be published on 1 January.

However, according to commentators, it seemed that hackers might have had other ideas, and from Wednesday McAfee's Twitter account began publishing recommendations of lesser-known crypto-currencies in quick succession.