Analjit Singh steps down as Max India split into three

Max India has announced a three-way split with promoter Analjit Singh stepping down from chairmanship of most of his holdings and group companies, a move aimed at inducting professional managers to run the group. 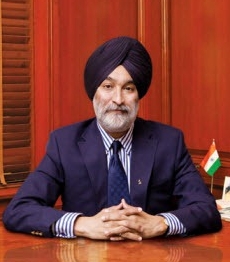 Analjit Singh, 62, will assume the role of founder and chairman emeritus after stepping down from the chairmanship as well as from the group's board.

Rahul Khosla will be the new president of Max Group.

Analjit Singh, one of the most prominent businessmen in the national capital, was an early mover into the telecom and healthcare businesses. He started a chain of hospitals in north India and partnered New York Life for the life insurance venture.

He also led Max India into the telecom space as a partner of Hutchinson in Mumbai.

Under the restructuring, former head of HSBC India Naina Lal Kidwai will join the group as chairman of the flagship Max Financial Services (MFSL), which will hold a 72.1-per cent stake in the life insurance joint venture company Max Life Insurance.

Analjit Singh will be the chairman emeritus and a permanent invitee to the boards and committees of all Max Group companies.

The company on Friday announced the vertical split of Max India in three parts. Besides MFSL, the other two companies would be Max India and Max Venture Industries (MVIL).

"This process of 'passing the baton' from the 'founder sponsor' demonstrates an evolution, which very few Indian business groups have been able to accomplish and signals high standards of transparency, governance, and forward thinking," said Analjit Singh, who now wants to concentrate on philanthrophy and new businesses.

Singh will remain chairman of MVIL, the third company formed after the split. His son-in-law Sahil Vachani will be the MD. Singh said MVIL will act as the group's entrepreneurial arm to explore the wider world of business.

This company will hold a 100-per cent stake of Max Speciality, which manufactures packaging films.

Following the split, the shareholding pattern will remain unchanged as all existing shareholders will get an equal number of shares in all three companies as they are holding at present in Max India.

Investors, will, however be given a choice either to continue to be associated with all these businesses, or to align with the set of businesses that suit them best.

The share price of the company fell marginally by 0.7 to Rs476 on Friday.

In Antara Senior Living, Singh will be chairman and his daughter Tara Singh Vachani will be MD. The company is involved in constructing retirement homes.