Maruti Suzuki has become the first car maker in India to reach a production milestone of 20 million cars. it achieved this record in 34 years and five months since it rolled out its first car, the iconic Maruti 800 in December 1983. 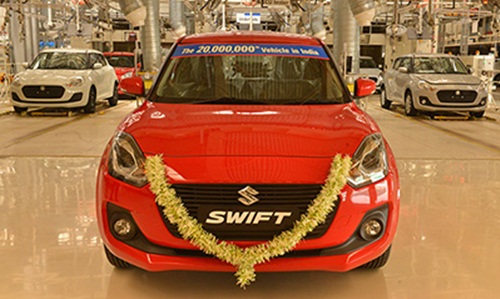 Suzuki Motor Corporation said in a statement, India has become the second country after Japan in which Suzuki has reached this milestone, and the fastest country to reach 20 million units in just 34 years and 5 months.
It had taken Suzuki 45 years and 9 months to reach the 20-million vehicle record in Japan.
Of the 20 million units, Alto was the most produced model with approximately 3.17 million units. Swift, produced at Maruti's Gujarat plant produced the the 20 millionth unit.
Suzuki’s automobile production in India started in December 1983 with its first model, the Maruti 800, manufactured by Maruti Udyog, the the previous name of Maruti Suzuki.
Since then, production units and models were increased to meet the expanding needs owing to the growing economy in India.
Today, various Maruti models are manufactured at Masruti Suzuki's plants in Gurgaon and Manesar in Haryana, and Gujarat, from where Suzuki’s 100 per cent subsidiary  Suzuki Motor Gujarat also manufactures cars.
At these three production sites, 16 models are produced including the Dzire, Baleno, Alto, Swift, WagonR, and Vitara Brezza.
In FY2017, approximately 1.78 million units were produced in India, of which 1.65 million units were sold in India and 130,000 units were exported to over 100 countries and regions including Europe, Japan, Asia, Africa, and Latin America.
Maruti Suzuki's top 5 models