End of the road for Maruti Suzuki Ritz in India

Maruti Suzuki has discontinued the Ritz in India as the hatchback, first launched in the country in 2009, saw a decline in fortunes due to competition from within and outside. 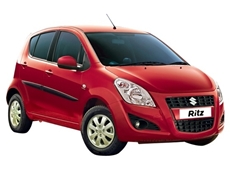 Maruti Suzuki has sold around 4 lakh units of the car in India so far and the company has now announced the end of the road for the hatchback.

Reports quoting MSI sources said the company is in the process of refreshing its product portfolio, and this will be a continuing process – a way of moving ahead with times.

With the new-gen cars from Maruti Suzuki taking over, the discontinuation of the Ritz was inevitable. However, a Maruti spokesperson said "Maruti Suzuki is committed to ensure availability of spare parts and service for next 10 years."

The company's recent launches - Baleno, Vitara Brezza and Ignis have been big hits in the Indian market. Both the Brezza and Baleno still have a long waiting period, and the Ignis too is bringing in the moolah.

The compact segment is where Maruti Suzuki has made strides in and with cars like the Ignis, Baleno, Celerio, Swift and Dzire, the company witnessed a growth of 25.5 per cent by selling 55, 817 units.

Maruti Suzuki has discontinued some other models and variants as well, which include the Estilo, the lower variants of the S-Cross with the 1.6-litre diesel unit, owing to low demand.

The company's next launch is the Baleno RS and the bookings for the car have already begun. The company will also add the Vitara Brezza petrol in its kitty which means it's a big year full of launches for the company.