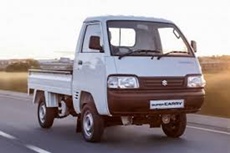 According to the company, the new vehicle would first be sold in three cities, Ahmedabad (Rs 4.03 lakh), Kolkata (Rs 4.11 lakh) and Ludhiana (Rs 4.01 lakh),  through dedicated channels.

According to RS Kalsi, executive director, (Marketing and Sales), Maruti Suzuki, the new vehicle had been designed and developed on the basis of detailed research and understanding of customer requirements.

"It offers best of both the worlds -- power and strength as well as carrying capacity. We are confident Super Carry will enhance the profitability of our customers," Kalsi was quoted in a company statement.

"Super Carry will be initially available for sale in three cities: Ahmedabad, Kolkata and Ludhiana. It will be retailed through a dedicated 'Commercial' sales channel."

The company said it had invested around Rs300 crore towards the development of Super Carry, which would be offered in diesel fuel option.

The LCV draws power from a 793cc diesel engine mated to a five-speed manual transmission. The new vehicle which offers a fuel efficiency of 22.07 km per litre has a  maximum speed of 80 km per hour and a payload capacity of 740 kg.

MSI had already started exports of Super Carry to South Africa and Tanzania in May this year ahead of its launch in the domestic market.

The LCV from the stable of the country's largest car maker in the domestic market had been delayed, as it was expected to launch in two years according to the company's statement at the time of its announced foray into the commercial vehicles market, June 2013.

The launch of Super Carry LCV in India formed part of the original agreement with parent Suzuki in 1982 but it was shelved due to poor response from the market at that time.