Based on an engine similar to the Maruti 800, the Alto offers better space, finish, and comfort levels, making its slightly higher price worth paying, suggests domain-b test driver K Shivraj. 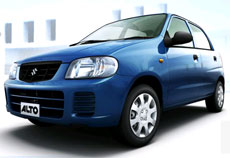 Initially, neither version picked up on sales. Coming from a company whose mainstay is small cars, this was a little surprising. But then, the 1.1-litre Alto was shelved; and the 800cc Alto suddenly saw a rise in sales. It combined the efficiency and low maintenance costs of the M-800 with the features of a more upmarket and more comfortable car.

Priced a little higher more than the 800, the Alto is today the largest selling small car in India. It has also appeared in a bigger, 1-litre engine avatar, the Alto K10, which also looks more stylish (See:Alto K10 – the upgrade clearly shows) . Now, the Alto sells close to 30,000 units a month.

Measuring 3495mm in length, 1475mm in width, and 1460mm in height, the Alto was based on the Japanese 'kei' car. Structured on a wheelbase of 2360mm, the hatchback looks conservative and straightforward. The design upgrades have added some glamour, supported by a slightly redesigned front and rear containing wraparound lamps; and the Alto manages to give a sense of modernity that competently masks an aging design.

Attractive from some angles, the Alto, riding on 145/80 R12 tyres and steel wheels, is low-set, and very unlike tallboys like the Maruti WagonR and the Hyundai Santro.

Priced around Rs2.5 lakh, the Alto can seat four in reasonable comfort. Seating three at the rear is possible, but is certain to be a squeeze. The seating is low, and the surrounding room not exactly ample. The doors open wide enough to enable easy ingress and egress. The way the doors operate should give a fair idea of the car's build quality. There are more solidly build cars around for sure.

But tilting the balance in favour of the Alto is the features it offers. It gives enough value for the price.  An air-conditioned Alto costs less than the newcomer in the 'B' segment, the Hyundai Eon (See: Hyundai Eon – stylish looks, good performance). Electrically-assisted power steering is also available.