M&M unveils the all-new Thar, bookings to start on 2 October

Mahindra & Mahindra unveiled the 2020 Thar, an enhanced edition of the iconic off-roader SUV, on Independence Day. The launch and bookings of the new Thar will start on 2 October, Mahindra said. 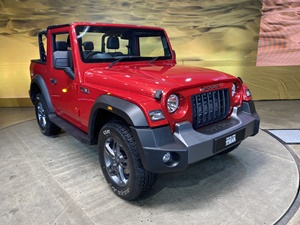 “Thar is an icon. There were many aspects that were intrinsic to its character. We retained them and at the same time, we also addressed some of the customer requirements. We built it with modern conveniences and made it really safe,” said Ramkripa Ananthan, chief designer of automotive business, M&M.
The classic proportions of the Thar had to be changed. Mahindra increased the track to 1,820 mm to liberate more space inside the cabin. The company has unsized the tyres, and now Thar sits on R18 (255/65) tyres. Thar’s wheelbase has been increased for easier ingress and egress.
The new Mahindra Thar gives two engine options – 2.0-litre mStallion petrol engine and the 2.2-litre mHawk diesel engine. The petrol engine can churn out 152 PS of power and a peak torque of 320 Nm. The diesel engine can churn out 131 PS of power and offer a peak torque of 300 Nm.
It comes in 6-speed manual transmission as well as 6-speed torque converter automatic transmission, with the 4x4 powertrain as standard.
The 2020 Thar boasts of a 3rd-gen chassis, which Mahindra claims to be of greater rigidity for superior off-roading capability. In addition, the 6-seater off-roader has a water wading ability of 650 mm.
The horizontal hood has also been raised to meet pedestrian safety. The new Thar features unique wheel arches - trapezoidal at the front and circular at the rear with faux skid plates added to both ends.
The new Mahindra Thar will come with hard-top and soft-top roofs, along with other features like LED daytime running lamps, alloy wheels, LED tail lamps
The all-new Thar flaunts a retro-modern cabin with all-new dashboard, a 7-inch touchscreen infotainment system, multi-colored TFT MID in the instrument cluster, all-new roof-mounted speakers and steering mounted controls.
The interiors of the new Thar are washable, which adds to its offroading capabilities
The 2020 Thar is set to be the new flagship offering from the SUV maker and is expected to be more upmarket than before. Also expected is a wide range of engine options to go with the heavy-duty off-road gear that the Thar is best known for.
The new Thar will come in two trim options AX and LX and will be available in six colour options with two new shades - Mystic Copper and Galaxy Grey.
The Thar off-roader SUV, the successor to Mahindra's popular MM540, has been one of the most iconic SUVs in India and it is the spiritual decedent of the Made-in-India Willys Jeep. The update to the Thar comes after 10 years, although it has been in development for a few years now.
MORE REPORTS