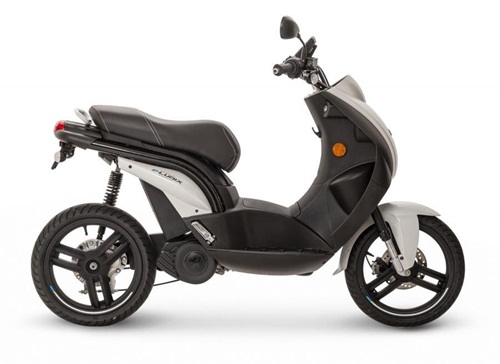 Mahindra, which owns 100 per cent of Peugeot Motorcycles, sells the locally-produced E-Ludix, a fully-electric scooter, in the European markets through its French subsidiary Peugeot Moto.
The E-Ludix made its first appearance at the Paris Motor Show last year. Now, the manufacturer has showcased the electric moped globally at the EICMA 2019.
The e-scooter, being manufactured at Mahindra Two Wheeler’s Pithampur plant in Madhya Pradesh, is yet to announce its India market plans.
The e-scooter is powered by a 3 kW battery, with the top speed limited to 45 kmph. The weight of the e-scooter has been kept down to a mere 85 kg, 9 kg of which comes from the Bosch battery it uses. The 3 kW battery takes about 3 hours to fully charge from 0 per cent, and has a claimed range of around 50 km thanks to its regenerative braking system.
And despite its compact size, the e-scooter gets a fully digital instrument cluster, a projector headlamp and a frontal disc brake. The scooter, showcased at the event sported a two-tone black and white paint scheme, along with various different accessories. Mahindra also owns another subsidiary called GenZe, which produces electric bicycles and scooters, sold exclusively in the United States.
Mahindra could be introducing the Peugeot E-Ludix or any of the GenZe products in India once the necessary infrastructure required by EVs is in place.
In late September this year, Mahindra exported the first batch of the E-Ludix to Peugeot, to be sold in Europe. “Bon Voyage to our 1st batch of electric 2wheelers — Made in India. A global network helps: they’re being shipped to our subsidiary Peugeot Moto. And though it’s not viable yet to sell our genZe & Peugeot electric bikes in India, you can count on us being in the game at some point,” Anand Mahindra, chairman, Mahindra Group had tweeted on the occasion.
Peugeot, one of the earliest companies to manufacture two-wheelers, built their first motorcycle in 1898 with a De Dion-Bouton engine mounted on the rear wheel. This model was shown at the 1898 Paris Exhibition but was not put into production. Peugeot produced a tricycle in 1898 although most of the machine was actually manufactured by De Dion-Bouton.
Peugeot produced their own motorcycle using a Swiss made Zürcher and Lüthi (ZL) engines - the Peugeot 500 M, a 500 cc (31 cu in) dual overhead camshaft model in 1914. In 1930, Peugeot acquired Automoto, a pioneer in the field of motorcycles and scooters. Peugeot was the leading French motorcycle manufacturer until the 1950s producing many models.
Mahindra and Mahindra acquired a 51 per cent controlling stake in the company In October 2014. Mahindra Two Wheelers Europe last month announced that the company will acquire 100 per cent ownership in the French two-wheeler maker Peugeot Motorcycles (PMTC). Mahindra also announced that it will be investing a further 15 million Pounds (around Rs110 crore) in the brand towards product development.
The investment is "set to drive future growth for Peugeot Motorcycles in core European markets and expand into new geographies, including select Asian markets," the manufacturer said in a regulatory filing. The Indian automaker plans to introduce seven new products under PMTC between 2019 and 2021.
Peugeot Motocycles’ Kisbee is the largest selling 50cc vehicle in Europe while Peugeot Metropolis is getting stronger in Europe and China and the market has responded positively to the new launch of Urban GT connected Pulsion.
Peugeot currently produces scooters and 3-wheelers with engines ranging from 50 to 500cc. Besides the Pithampur plant in Madhya Pradesh, it operates two production sites at Mandeure, France and Jinan, China. Peugeot scooters are sold in 60 countries.
MORE REPORTS