Mahindra and Mahindra will invest Rs650 crore (around $100 million) in a joint venture with Ford in India, under which will allow the two companies to offer new products to customers faster than before thereby helping to deliver profitable growth to both companies. 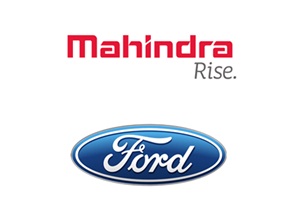 “Valued at Rs1,925 crore ($275 million), the joint venture will drive enhanced competitiveness through greater economies of scale across the automotive value chain, including optimised sourcing, product development, use of relevant technologies and a global network,” Mahindra stated in a release.
Mahindra will own a 51 per cent controlling stake in the joint venture and Ford will own the remaining 49 per cent, M&M stated in a stock exchange filing.
The JV will be formed by Mahindra investing around $100 million, or Rs 650 crore, to acquire 51 per cent stake in Ardour Automotive Pvt Ltd, a wholly owned subsidiary of Ford, M&M managing director Pawan Goenka said in a press conference in Mumbai.
Ardour Automotive will in turn acquire the automotive business of Ford India Pvt Ltd, another wholly owned subsidiary of Ford.
“Valued at Rs 1,925 crore ($275 million), the Mahindra-Ford JV will drive enhanced competitiveness through greater economies of scale across the automotive value chain, including optimised sourcing, product development, use of relevant technologies and a global network," M&M said in the statement.
The joint venture will sell Ford vehicles in India, and Ford and Mahindra branded vehicles in other markets.
Both Mahindra and Ford will continue to own their respective brands and operate their own independent dealer networks in India.
Ford will transfer its India operations to the joint venture, including its personnel and assembly plants in Chennai and Sanand. But will retain the Ford engine plant operations in Sanand as well as the Global Business Services unit, Ford Credit and Ford Smart Mobility.
The JV will be operationally managed by Mahindra, and its governance will be equally composed of representatives of Mahindra and Ford. It is expected to be operational by mid-2020, subject to regulatory approvals.
The Mahindra-Ford JV expects to introduce three new utility vehicles under Ford brand, beginning with new mid-sized SUV.
Another area of focus for the joint venture will be electric vehicles. Ford and Mahindra will collaborate to develop vehicles to support the growth of sustainable mobility across emerging markets.
The two companies had announced a strategic alliance in September 2017 to develop smaller SUVs, electric cars and other in-vehicle technologies.
“Mahindra and Ford coming together is a testament to the long history of cooperation and mutual respect between the two companies. Our combined strengths – Mahindra’s expertise in value-focused engineering and its successful operating model, and Ford’s technical expertise, global reach and access to future technology – are a potent recipe for success,” said Anand Mahindra, chairman, Mahindra Group.
“Ford and Mahindra have a long history of working together, and we are proud to partner with them to grow the Ford brand in India. We remain deeply committed to our employees, dealers and suppliers, and this new era of collaboration will allow us to deliver more vehicles to consumers in this important market,” said Bill Ford, executive chairman, Ford Motor Company.
Ford’s newly established International Markets Group (IMG) business unit will play a key role in the process. IMG brings together 100 high-potential, emerged and emerging markets including India Australia, ASEAN, Middle East, Africa and Russia.
The US carmaker will take an $800-900 million impairment charge related to the value of its India assets in the third quarter, it said in a separate filing. Ford has invested $2 billion in India only to achieve a market share of less than 3 per cent.
Ford was among the first global automakers to enter India in 1995. As one of the largest exporters of vehicles from the country, Ford manufactures and exports vehicles and engines from its facilities in Chennai, Tamil Nadu and Sanand, Gujarat. India is the third-largest Ford employee base globally, with more than 14,000 people working across the Ford India and Global Business Services operations in Delhi, Chennai and Coimbatore. Under the new structure, Ford said it will continue its support for all corporate social responsibility initiatives.
MORE REPORTS