The Pininfarina Battista also gets a range of up to 450 km on a single charge, according to the company. 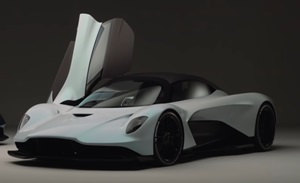 When it arrives in 2020, the Battista will be the most powerful car ever designed and built in Italy. It has the potential to accelerate to 62 mph (100 km) in less than two seconds, faster than a Formula 1 car, and break the 250 mph (400 km) top speed barrier all with a potential zero emissions range of over 300 miles (480 km), the company said.

"The year 2020 is also the 90th anniversary of the legendary Pininfarina SpA design house, which has taken the design brief for the Battista and produced a classic Pininfarina. It is the same design principle of form and function in harmony as seen in classic Pininfarina cars reaching back to the Cisitalia 202 of 1947 and through more than 100 Ferraris, the most recent of which was launched this decade," the company stated in a release.

"This is the most authentic and exciting automotive story imaginable. The Battista is the hypercar of the future, inspired by a legendary past. It combines true inspiration and innovation in its technical achievement and emotional appeal," Automobili Pininfarina CEO Michael Perschke said.

"No more than 150 Battistas will be hand-crafted in Italy and allocated equally between the regions of North America, Europe and Middle East/Asia. Plans are in place for the opportunity to fully personalise each car at Pininfarina SpA's Cambiano headquarters," the company stated.

Cooling circuits and systems are based around five radiators. Massive, carbon-ceramic 6-piston brakes (390 mm at the front and 390 mm at the rear) provide fade-free deceleration while an effective brake regeneration to the battery will be engineered into the system.

The Battista's suspension is tuned specifically to deliver a comfortable and dynamic driving experience. The driver will be able to electronically adjust the suspension through multiple modes and will also be able to tailor the noise the car makes thanks to an on-board sound programme which focuses on using vehicle hardware to generate acoustic entertainment.

According to the company, the Battista electric hypercar is faster than a current Formula 1 race car. With 1900 hp of power and 2300 Nm of torque, this electric car can go from 0-100 kmph in under two seconds. 0-300 kmph is achieved in less than 12 seconds and it can reach a top speed of 350 kmph.

Customer service will be delivered through some of the world's best luxury car retail specialists, from Los Angeles to London to Tokyo, it added.

The Turin-based company has named the model after Battista 'Pinin' Farina, the founder of the Carrozzeria Pininfarina coach building company that he started in 1930. The all-electric hypercar is designed and hand-built in very limited numbers at Pininfarina SpA.

The Mahindra Group had acquired Pininfarina in late 2015 for an overall outgo of over EUR 50 million after months of negotiations.