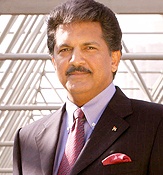 The Mahindra Group intends to play a pioneering role in the development of driverless tractors and commercial vehicles, its chairman Anand Mahindra said on Wednesday.

"Mahindra is investing in the future of mobility by combining our innovative manufacturing capabilities with our investments in downstream platforms," he said while addressing the company's annual general meeting in Mumbai.

Stressing on the group's ambitions to be prepared for the future, Mahindra said, "Everyone in the world is speculating whether conventional mobility companies will survive in a transformed environment. I am not an astrologer and cannot provide guarantees on that score, but I did want to emphasise to you all today, that if anyone is preparing feverishly for a disruptive future of mobility, it is Mahindra."

The stress is on using the strength of telematics skills in the larger Mahindra Group and focus strongly on developing autonomous, driverless commercial vehicles, he added.

Citing the example of the tractor, he said, "I also believe that the most fertile ground - pardon the pun - for autonomy is in agricultural tractors ... it is also an area where paranoia about accidents and collisions is virtually non-existent.

"Tractors that operate autonomously could change the future of food production. This is an area where Mahindra, as the largest tractor producer in the world, intends to play a pioneering role."

Commenting on shared mobility, he said, "While we have products in our stable today and in our pipeline that will appeal to the mobility-sharing companies, I also believe manufacturers need to take a share of the profit pool of these downstream platforms."

The group is doing that not just by investing in them - as it has done in the US with Scoot networks - but also by incubating unique and differentiated platforms on its own.

For example, Mahindra said, "Our SmartShift initiative for LCVs enables people who want to transport cargo and transporters who have vehicles on offer to find each other, and work out mutually beneficial deals.

"Our Trringo business is revolutionising tractor industry by enabling farmers to hire tractors for short periods of time, bringing mechanisation within the reach of every small farmer. The shared economy is no longer in the future - it is here.''