India's leading SUV manufacturer Mahindra and Mahindra will launch the fully electric version of its only sedan, the Verito, on 2 June. The car has been named e-Verito and will finally make its debut after its launch had been delayed in the last two years. 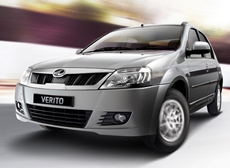 The electric Verito vehicle was first showcased at the 2014 Auto Expo, and also at this year's Auto Expo. Mahindra subsidiary, Reva, which M&M acquired in 2010, has provided the EV expertise (See: M&M acquires controlling stake in Reva) .

The car is powered by a 72V electric motor which delivers 41PS and an instantaneous torque of 91Nm. With these figures, the e-Verito would have a top speed of 86 kmph. Additionally, Mahindra claims, the vehicle offered a mileage of 100km on a full battery charge. But the full charge time for the battery is a hefty 8 hours.

People who drive over 100 kilometres daily would find it difficult to put the e-Verito on charge intermittently.

To address this concern, Mahindra is offering a faster charging mode for the top end D6 trim which shortens the charging time to six and a half hour. Besides the D6 trim, Mahindra has two more trims on offer, namely the D2 and D4.

The e-Verito offers an exceptionally smooth and noiseless driving experience and packs in features like hill-hold and great stand-still pick-up.

According to commentators, the e-Verito electric sedan would carry a price tag of price of Rs8 lakh base (ex showroom, New Delhi).