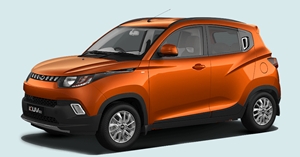 KUV100, priced in the range of Rs4.42 lakh to Rs6.76 lakh, is competitive across variants and is targeted at buyers of hatchbacks such as Maruti Suzuki's Swift and Hyundai's Grand i10.

The company's executive director Pawan Goenka said the SUV has been in the making for the last four years, while chief executive Pravin Shah said it has invested Rs1,200 crore on the project.

In a video message, chairman Anand Mahindra said launching the Scorpio in 2002 was the first inflection point for the company, and the KUV1OO is the second inflection point.

''This is something new for Mahindra, we're going into unchartered territory. Over the last three-four months, our confidence on having a winner on our hands has increased,'' Goenka said.

Goenka said the company has received 50,000 ''hot enquiries'' for the product in the last few weeks, but declined to specify a sales target.

The company has received 1.4 million visits on a dedicated micro-website for the product over the last few months, and will be using e-commerce websites such as Flipkart to sell the SUV.

Conceptualised and developed with the aim of creating an entirely new category, the KUV100 is a compact SUV where 'K' stands for the 'kool' and trendy generation of youth, while UV represents an SUV.

The numeric '100' represents the pecking order of the series which comes in below TUV300 and XUV500.

With its aggressive styling and dominating SUV stance, the KUV100 remains true to the tough and rugged Mahindra DNA.

The KUV100 will be powered by the world-class mFALCON, an all-new engine family with options of both petrol (mFALCON, G80) and diesel (mFALCON, D75). Named after a bird of prey, the mFALCON is a compact lightweight engine built to deliver peppy and high performance, much like its namesake.

The 1.2L, 82 HP and dual VVT petrol engine and the 1.2L 77 HP turbo-charged diesel engine both deliver high, low-end torque for the perfect SUV performance and an enjoyable drive.

The petrol engine is a 1198 CC, 1.2 litre 'mFALCON engine delivering 82bhp of power. The diesel variant also uses a 1,198 cc engine, which has also been developed anew.

The vehicle comes in a five- and six-seat configuration, with bench-type front seats to accommodate the sixth person.

The KUV1OO is the ninth offering from Mahindra this year.

All earlier offerings in the passenger vehicle segment, including the Scorpio, run on diesel engines. At present, the company controls a 40 per cent market share in the SUV segment.