Mahindra & Mahindra, the home-grown SUV leader, will launch the much-awaited Mahindra KUV100 compact SUV in the Indian car market on 15 January 2016. Bookings for the mini SUV have already commenced at a token amount of Rs10,000. 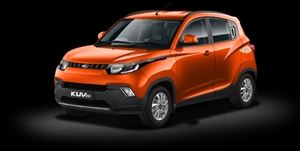 Ahead of its launch, the variant wise features of the sub-4 metre SUV have been made available by the company. The engine specifications and other details of the SUV have already been revealed. Interestingly, the range-topping variant gets Mahindra's Micro Hybrid Technology.

All the variants are equipped with ABS with EBD and Engine Immobilizer as standard safety features.

The Mahindra KUV100 will be offered with four trim levels - K2, K4, K6 and K8 - and in total of 8 variants. Dual airbags come as an optional across the lineup.