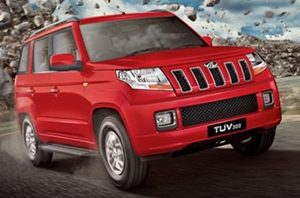 Powered by a 1.5-litre turbodiesel engine that puts out 85PS of power and 230Nm of torque, TUV300 is available in seven variants, including an AMT (automated manual transmission) one.

The vehicle will be the first of its kind in the compact segment as it will offer both automatic manual transmission (AMT) and anti lock braking systems (ABS) along with dual airbags for all the three variants.

Mahindra has priced its new battle tank-inspired compact SUV between Rs6.90 lakh for the base version and Rs9.12 lakh for the fully-loaded version (ex-showroom, Pune).

The SUV is being offered in three different variants - T4 (base variant), T6 and T8 - and six colours plus one made to order combat green colour. The SUV is only available in BS4 version.

The TUV3OO (pronounced as TUV, 3 double 'O') is a sub four-metre vehicle and will compete with Ford EcoSport, Hyundai's newly-launched Creta and Renault's Duster.

The company is also gearing up to launch five new vehicles in this financial year.

Mahindra is seeking to reinforce its hold on the chassis-based SUV targeting true-blue SUV lovers.