Mahindra Solar One sets up its first plant

Mahindra Solar One, a joint venture between the Mahindra Group and Kiran Energy for solar power development, commissioned its first solar power plant near Jodhpur in Rajasthan. 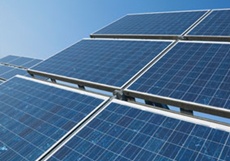 A part of the Jawaharlal Nehru National Solar Mission (JNNSM) policy, the project was the first to achieve non-recourse financing in the industry.

Group vice chairman Anand Mahindra said the company aims to generate over 100 MW of solar power in the next couple of years at a cost of around Rs1,000 crore.

"Government policies are very encouraging for setting up solar plants. We will be bidding for further solar projects under the JNNSM," he said. "Our target is to be among the top three players in the solar industry in the next five years."

The engineering, procurement and construction arm of Mahindra Solar, Mahindra EPC, has commissioned this project in a record time of 100 days and the plant is expected to provide solar electricity equivalent to around 60,000 rural homes and avoid emissions of about 8,000 tonnes of carbon dioxide annually, he said.

India's solar energy sector has attracted several last business groups such as the Tatas, Anil Ambani's Reliance Power, GMR and the Adani group, which last week commissioned India's biggest solar unit to generate 40 MW. Foreign companies are also bidding for projects as India aims to scale up its solar power generation capacity to 20,000 MW by 2020 from around 250 MW now.