M&M emerges among global leaders with 1.59 lakh tractor sales in 2009

Mahindra and Mahindra (M&M) has emerged among the world's top tractor sellers. M&M sold 1.59 lakh tractors in 2009 and is targeting to sell 1.7 lakh tractors (on a consolidated basis) by end of this financial year. 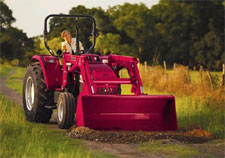 The company passed the 1 lakh milestone in January which was a very special milestone for the company.

Anjanikumar Choudhari, president of the farm equipment division at M&M said it was a clear validation of the strong bond the company had forged with the Indian farmer over the past four decades. He added that the focus was on moving beyond tractors to deliver agri-services to the farming community which would ultimately lead to a better quality of life he added.

The company has enhanced its share in the Indian tractors market from 35 per cent to 42-43 per cent after scripting a turnaround story for Punjab Tractors (now Swaraj) which it acquired in 2007.

By way of a commemoration of the landmark event the company held the first ever Mahindra Samriddhi convention in Mumbai. The company announced grants worth Rs101 lakh to students and scientists from ten agricultural universities. The initiative is aimed at nurturing budding agricultural talent and offering education in innovative farming technologies to underline M&M's commitment to agri-prosperity.

''The one-lakh milestone is a special one for us. The Farm Equipment Sector has now expanded its business vision to move beyond tractors to the larger area of helping to improve productivity in Indian agriculture. I am, therefore, also delighted to preside over the very first Mahindra Samriddhi Convention which will see farmers, agricultural experts and channel partners come together on a common platform to share knowledge and best practices related to farming and mechanisation in India,'' said Choudhari.