The boards of container shipping companies Maersk Line and Hamburg Süd yesterday approved their merger, days after the European and the US regulators approved the transaction. 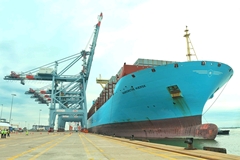 Copenhagen-based Maersk, did not then reveal the financial terms of the transaction, but yesterday said that it will pay €3.7 billion ($4.02 billion) for the acquisition.

Maersk said that it has received a syndicated loan facility to finance the acquisition.

The acquisition is expected to generate annual operational synergies of around $350-400 million from 2019 from integrating the vessel networks as well as utilising the terminal capacity in APM Terminals.

The proposed acquisition would still approval from regulators in China, South Korea, Australia and Brazil.

Hamburg Süd, part of the Oetker Group, a family-owned German conglomerate involved in shipping, banking, food and beverages, is the world's seventh-biggest container operator in terms of capacity.

Founded in 1871, Hamburg Süd is one of the leading providers in the North-South trades and has a total of 130 container ships, including 48 owned and 82 chartered, and 59 chartered Tramp ships, and has annual revenue of $6.7 billion.

Maersk, which moves about 15 per cent of global seaborne freight, has recently said that it is looking for acquisitions to increase its market share and the deal will deal will boost its presence in global trade with Latin America.

Maersk is the world's largest container shipping company providing ocean transportation in all parts of the world.