Lockheed Martin Corp has won a $247.5-million contract from Nasa to build a quieter supersonic jet, a move that would lead to developing planes that can whisk passengers around the globe much more quickly. 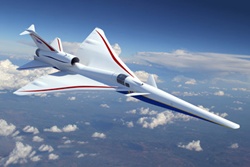 Nasa on Tuesday awarded Lockheed Martin Skunk Works a contract to design, build and flight test the low-boom flight demonstrator, an X-plane designed to make supersonic passenger air travel a reality.
The experimental aircraft is expected to take to the skies in 2021 and will have a top velocity of 1.5 times the speed of sound, or about 990 miles per hour (1,600 kilometers) at an altitude of 55,000 feet, Lockheed said in a statement.
While the jet will only have room for a pilot, it will test design principles that soften the sonic boom
"It is super exciting to be back designing and flying X-planes at this scale," said Jaiwon Shin, Nasa's associate administrator for aeronautics. "Our long tradition of solving the technical barriers of supersonic flight to benefit everyone continues."
Lockheed Martin Skunk Works will build a full-scale experimental aircraft, known as an X-plane, of its preliminary design developed under Nasa's Quiet Supersonic Technology (QueSST) effort.
The X-plane will help NASA establish an acceptable commercial supersonic noise standard to overturn current regulations banning commercial supersonic travel over land.
Peter Iosifidis, Low-Boom Flight Demonstrator programme manager, Lockheed Martin Skunk Works, said, "We look forward to applying the extensive work completed under QueSST to the design, build and flight test of the X-plane, providing NASA with a demonstrator to make supersonic commercial travel possible for passengers around the globe."
Lockheed Martin Skunk Works and Nasa have partnered for more than a decade to enable the next generation of commercial supersonic aircraft. Nasa awarded Lockheed Martin Skunk Works a contract in February 2016 for the preliminary design of the supersonic X-plane flight demonstrator.
The aircraft will be built at the Lockheed Martin Skunk Works facility in Palmdale, California, and will conduct its first flight in 2021.
Nasa and Lockheed Martin are seeking to foster technology that can overcome noise restrictions on supersonic flight, which has been banned overland for civil aircraft since 1973. The aim is opening the skies to faster jet travel and spurring manufacturers to build speedier aircraft.
The first supersonic commercial airline Concorde that began service in 1976, built by a French-British coalition and flown by Air France and British Airways, was discontinued in 2003 in part because noise complaints limited its flights.
Lockheed’s experimental plane will use existing parts, such as the landing gear from an F-16 Fighting Falcon and the pilot seat from a T-38 Talon, and will measure 94 feet long with a wing span of 29.5 feet.
“It’s about the data that will be collected. It’s that data that is used then to shape the future,” Richardson said. “We’re very confident as we go forward from here in the design that we have, and being able to achieve that low-boom signature.”
Nasa expects private business jets to be the first type of supersonic aircraft to have commercial success if the ban on overland flight is lifted. Large passenger airliners that break the sound barrier probably won’t show up until after 2035, according to NASA’s vision.
Meanwhile, Aerion Corp, a business jet startup backed by Texas billionaire Robert Bass, is working on a design that would fly overland just under the speed of sound and then speed up to Mach 1.4 over the ocean.
Gulfstream, a unit of General Dynamics Corp, has said it won’t attempt to build a supersonic aircraft until it’s cleared to fly open-throttle over land and sea.
Boom Technology Inc, a Colorado startup, is developing a supersonic passenger jet with 45 to 55 seats, and attracted a $10 million investment from Japan Airlines Co. in December.
Lockheed had helped Nasa build a small prototype of the quieter new supersonic plane that was tested in a wind tunnel. Lockheed in December also agreed to help Aerion build its supersonic jet.
MORE REPORTS