L&T's AM Naik to step aside, Subrahmanyan named new CEO 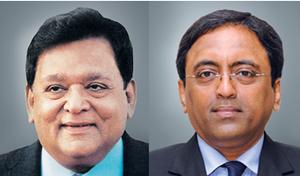 Subrahmanyan will take charge as CEO on 1 July 2017.

With the planned succession and Naik staying around to guide the group, Subrahmanyan expects business to continue the ''L&T way''.

''This was a well-planned succession plan - Naik has been grooming me for last two to three years and we have had a very close working relationship. The strategic plan for 2020-21 is already in place. It would be business the way L&T would do it,'' Subrahmanyan told Business Standard by telephone.

Naik had given himself a five-year extension in 2012 to restructure the complex businesses, focus on core business, exit non-core businesses and find his successor. His current term as group executive chairman ends on 30 September.

On Naik's role as non-executive chairman, the company said in a statement said, ''Taking into account the need for seamless transition of leadership in an organization of the scale and complexity of L&T, the board of directors requested Mr Naik to provide advice, guidance and mentorship to the company's executive management in the capacity of non-executive chairman.''

Naik, now 74 years old, was appointed CEO of L&T in 1999 and chairman in 2003. He will step down as executive chairman in September this year when his term ends.

One of Subrahmanyan's challenges at L&T would be to maintain the growth rates the group has been seeing, with a growing order book. In the December 2016 quarter, L&T's order inflow was at Rs34,890 crore and the company's order book was at Rs2.58 lakh crore.

One of Subrahmanyan's challenges at L&T would be to maintain the growth rates the group has been seeing, with a growing order book. In the December 2016 quarter, L&T's order inflow was at Rs34,890 crore and the company's order book was at Rs2.58 lakh crore.

L&T, which is seen as a bellwether of economic activity in the country, has been facing headwinds in terms of order book guidance and execution. The ambitious target shared at the company's annual general meeting in September, requires L&T to generate Rs2 lakh crore of revenue and an order inflow of more than Rs2.5 lakh crore per year by 2021.

In terms of management structural changes expected with the new appointment, Subrahmanyan said,'' There is no major change. The leadership will remain more or less the same.''

''Mr Subrahmanyan is a top-notch professional of outstanding ability and commitment. Across the last 10 years, and especially after he was identified as the likely successor three years ago I have been personally mentoring Mr Subrahmanyan. I am confident that under Mr Subrahmanyan's high calibre leadership, the company will accelerate its growth momentum,'' Naik said.

Naik: L&T's helmsman
Speaking on Naik's  role, Subodh Bhargava, chairman of the nomination and remuneration committee said: ''Mr A M Naik has been the soul of L&T, and has given his whole life to L&T. We are delighted that he has agreed to continue to help the company for the next 3 years.''

AM Naik is strongly identified with the growth of L&T and its contribution to the strategic sectors of defence, nuclear power, space research and infrastructure. He was responsible for creating large number of new businesses for the company.

A Padma Bhushan awardee, and winner of several national and international awards, he has served the company for over 52 years. He was appointed CEO of L&T in 1999 and chairman in 2003. His stewardship has seen an upsurge in shareholder value with market capitalisation rising from Rs4,400 crore in 1999 to Rs1,58,000 crore in 2017. Naik is also widely acknowledged as the architect of the transformation of L&T into a sharply focused company delivering superior value to stakeholders.

He has been responsible for L&T's foray in international business and consolidated its presence overseas to the extent that international operations now account for around 30-35 per cent of the company's total turnover. L&T has played a key role in building Indian infrastructure over the past decades as well as building many critical programmes for India's defence and nuclear.

Naik is credited with protecting the professional character of L&T and boosting employee morale with the creation of the L&T Employee Welfare Foundation. Thanks to his efforts, the Foundation today holds 13 per cent of L&T's equity shares as against near zero earlier and helps in ring fencing the company while simultaneously allowing employees to share in the company's growth.

Naik has been awarded four doctorates and numerous awards from institutions and industry. He also served as the chairman of IIM Ahmedabad.

As a robust upholder of L&T's value system, Naik has played a critical role in ensuring that the company retains its unique ethos across the decades.