S Korean electronics giant LG has unveiled an ultra-thin 'wallpaper TV', that is  less than 1mm thick, and weighs just 1.9 kg - light enough to be mounted on a wall using just magnets. 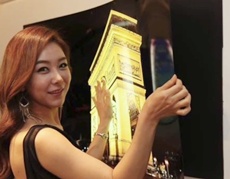 LG unveiled the concept TV at a press event in Korea

According to LG Display, the OLED TV was, at the moment just a concept.

To remove the display from the wall, users need to peel the screen off the mat.

The company used high molecular substance-based polyimide film as the backplane of the flexible panel rather than conventional plastic to achieve the maximum curvature radius.

The transparent OLED panel, boasts 30 per cent transmittance, which was achieved by adopting the company's transparent pixel design technology.

The firm hopes the popularity of OLED TVs would rise exponentially in the coming years.

According to the head of LG Display's OLED business unit, Sang-Deog Yeo, OLED represented a groundbreaking technology' not only for the company, but also for the industry.'

According to Sang-deog, the company planned to ramp up OLED display production in Q3 of 2015.

"We should be able to supply a satisfactory volume to our clients from July or August, which means we're hoping to buckle down production as well as promotion from the third quarter," Sang-deog told reporters at the event.

The company had seven new OLED TV sets on display at this year's CES in January, ranging from 55-inch to 77-inch models.

At Tuesday's event, LG also announced it would launch a 99-inch OLED TV - though it likely would not be as thin as the prototype displayed.