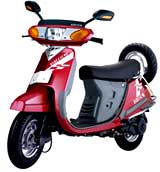 According to Kinetic the test was conducted across several traffic and road conditions, with constant load on the scooter and varied speeds. This methodology was used to arrive at a range of mileage figures from the highest to the lowest to determine the overall fuel efficiency keeping in mind that the mileage obtained from a vehicle varies depending on the riding style, vehicle load and traffic conditions.

The data from the testing resulted in the highest mileage figure of 68 kmpl, lowest at 45 kmpl and an overall mileage figure of 56 kmpl. A similar test conducted on the Honda Activa by Bam showed the mileage of the 4s to be 12 per cent higher.

Announcing the test results, Ajinkya Firodia, general manager, marketing, Kinetic Motor Co, said, "The Kinetic has proven its endurance and reliability by winning three Guinness world records. Now, with the new 4-stroke engine it has proven its extraordinary fuel efficiency as well. The combination of high mileage, proven design and metal body is a winner for sure!"

Kinetic 4s has a new 115cc, 4-stroke engine, metal body and equipped with all accessories including an extra stepney tyre.