The king-sized ego that felled the king of good times

Ego, which often fires our resolve to do even the seemingly impossible, could also be an intense force of self-destruction. When a business leader is blinded by bloated ego, it not only destroys his or her own personal wealth, but also the wealth and incomes of employees, business partners, and shareholders. Vijay Mallya is only the most recent example. By Shivshanker Verma 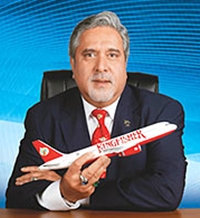 Few human traits can match ego in its potential to uplift our ability to achieve seemingly impossible deeds, or its power to destroy achievers hitherto considered infallible. Not many have gained success without the vitalising push from a positive ego, which forces you to strive harder and gives you the mental strength to survive rough weather when most others would give up.

But once you achieve success and fame, the very force that helped you reach there becomes a potential threat. It is easy for successful people to start believing in the larger than life image of themselves, created by the hangers-on and the media. It is hard to detect the beginning of hubris, but once it sets in, doom and destruction is not that far.

Vijay Mallya is the most recent victim of bloated ego, which prevented him from acknowledging the writing on the wall even when it was most obvious. He was once a king indeed. The man who controlled one of the largest business groups in India's consumer discretionary goods sector, with a bouquet of powerful brands and dominant market share. In the alcoholic spirits business, the UB group remains one of the world's largest by volume even today, with multiple brands selling more than a million cases annually.

When Forbes magazine last year said it will stop describing him as a billionaire, Mallya tweeted that he felt relieved that he could now get on with his life. But it was the billionaire title that defined Mallya the most. He was only one among the several billionaires the country produced during the last decade, but to the public, in many ways, he was 'the billionaire'.

No other person on the rich list could match Mallya's unabashed flamboyance bordering on arrogance and his penchant for glitz and glamour. The media celebrated his extravagant lifestyle - palatial homes in multiple cities, the yacht, private jets, and parties attended by Hollywood stars. It was easy to miss the decay that was slowly creeping in, and ignore it when it became evident.

The comparison to Richard Branson was inevitable, but probably very misleading. Unlike Mallya, Richard Branson is a self-made man. Starting from a music store, he built a global conglomerate, all by himself. Branson has painstakingly nurtured his core businesses and most of them have grown in sectors with entrenched players, by carving out their own identities.