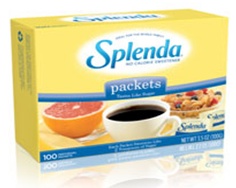 The New Jersey-based company has hired Goldman Sachs to run an auction and the process is at an early stage, with prospective buyers currently signing non-disclosure agreements, the report said.

Splenda is a low-calorie artificial sweetener containing sucralose. Sucralose, which is produced from sugar, is not metabolised in the body and therefore has lower calorie content than sugar.

Splenda, which is in granular and tablet for, has been approved for use as a tabletop sweetener, for beverages, chewing gum, frozen desserts, fruit juices, gelatins and as a general purpose sweetener in all foods. It is also widely used by people with diabetes.

Splenda has annual revenue of around $300 million and is likely to attract interest from private equity buyers, the report added.