US healthcare group Johnson & Johnson has agreed to buy Swiss orthopaedic devices maker Synthes Inc, in a cash-and-stock deal worth around 21.3 billion (19 billion Swiss francs) - its largest acquisition so far. J&J owns about 250 separate companies under its corporate umbrella. 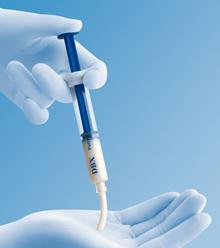 The acquisition, expected to close in the first half of 2012, will give J&J a leading position in the trauma treatment segment.

"The acquisition will create the world's most innovative and comprehensive orthopaedics business," Johnson & Johnson said in a release.

Analysts do not expect anyone to mount a rival bid, despite the consolidation in the medical devices sector.

Based on the market price of CHF159.0 per share for the 119.5 million outstanding Synthes common stock as of the close of business on 26 April 2011, the net cost of transaction for J&J works out to $19.3 billion. In addition, Synthes approximately has $2 billion in cash on hand at the time of signing, the release said.

Under the terms of the agreement, Johnson & Johnson will pay Synthes, subject to certain conditions, CHF55.65 in cash for each stock and the remaining CHF103.35 in J&J common stock.

The boards of both Johnson & Johnson and Synthes have approved the transaction. Dr Hansjoerg Wyss, Synthes founder and chairman of the board, and related parties have already pledged 33 per cent of Synthes common stock in support of the transaction, J&J said.

DePuy has a diverse portfolio of orthopaedics products while Synthes is an innovative maker of trauma, spine, cranio-maxillofacial and power tools. The combination will offer a complete and unique range of technology, products and services for surgeons and patients worldwide.

"DePuy and Synthes together will create the most innovative and comprehensive orthopaedics business in the world and enable us to better serve clinicians and patients worldwide," said Bill Weldon, chairman and chief executive officer of Johnson & Johnson. "Orthopaedics is a large and growing $37-billion global market and represents an important growth driver for Johnson & Johnson. Synthes is widely respected for its innovative high-quality products, world-class R&D capabilities, its commitment to education, the highest standards of service, and extensive global footprint," he added.

"The combination of Synthes and Johnson & Johnson, two organisations focused on the best patient care and improving health care throughout the globe, is a very exciting and promising oneI am very pleased and excited that my life's work will continue as part of Johnson & Johnson," said Dr Wyss, founder-chairman of Synthes.

Together the two companies are targeting an aging population, patient's desire to remain active, increasing rates of obesity and the resulting impact on joint disease, growing treatment demands in emerging markets, and a movement toward earlier intervention.

The transaction, which is expected to close during the first half of 2012, is currently expected to have a modestly dilutive impact on adjusted earnings per share of Johnson & Johnson.

The transaction is subject to clearance under the Hart-Scott-Rodino Antitrust Improvements Act, approval by the European Commission and regulatory approval in certain other jurisdictions, as well as other customary closing conditions. The merger will also require the approval of Synthes' stockholders, the release added.