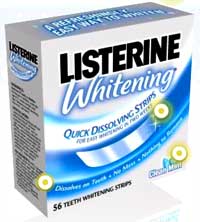 Procter & Gamble has filed a lawsuit against Johnson & Johnson and McNeil-PPC, Inc., the manufacturer and distributor of Listerine Whitening Quick Dissolving Strips, sold in the US, for infringement of two of its patents.

P&G, the largest consumer-products company in the US, has filed several suits against rivals over product infringement, and packaging and marketing disputes in the past year.

Johnson & Johnson launched Listerine teeth whitening strips last year billing them as being "quick-dissolving" within 5 to 10 minutes while being on the move, and therefore, more convenient to use than others on the market. It also said the product had shown strong performances in the last quarter.

P&G says it had created "a new product segment" with its hydrogen peroxide-based Crest Whitestrips in 2000, which has since been used by 30 million people and become an important part of its overall oral-care product portfolio.''

Johnson & Johnson's Listerine Whitening and other rivals have since then eaten into Crest's market share for the home-whitening product, from around 70 per cent over a year ago to 56 per cent. ACNielsen estimates the market for the segment at $240 million.

The lawsuit seeks to stop Johnson & Johnson and McNeil-PPC, Inc. from making, selling, and importing any products that infringe P&G's patents on tooth-whitening products and also seeks damages.